The World Health Organization announced Uganda would use a new vaccination technique against the Ebola virus on Thursday if the outbreak spreads from the Democratic Republic of Congo, which has been hit twice year, according to Reuters.

Uganda borders the North Kivu and Ituri provinces where Ebola is believed to be the cause of 97 deaths since the latest outbreak, with another 45 people infected.

One of those deaths was recorded in the Congolese city of Butembo, which is a crucial hub for mineral exports and imports from East African ports via Uganda, so the infection poses a risk to potentially spreading into Uganda.

WHO issued a statement on Thursday which said the organization was assisting Uganda, which has had no Ebola outbreaks yet this year, to establish a "ring vaccination" strategy after using a similar technique to manage the outbreak in the DRC.

Health officials work to ensure every contact of an Ebola case including health workers and family members are traced and vaccinated.

“The opportunity that vaccinating frontline health workers and ring vaccination provides to contain the disease (...) is one that must never be missed. That’s why we are making all these costly but necessary preparations”, WHO’s Uganda Representative Yonas Tegegn Woldermariam said in the statement.

Ugandan officials have already identified locations to store the vaccine and installed equipment to ensure it can be transported and administrated nationwide.

Uganda's last Ebola outbreak was in 2017 but has had five outbreaks since 2000 of the contagious disease which can cause hemorrhagic fever, vomiting, and diarrhea.

West Africa suffered a terrible outbreak from 2013 through 2016 which killed more than 11,300, though treatment options were less advanced during that time period.

The experimental vaccine was used for the first time in Congo this year and is manufactured by Merck to target to Zaire strain of the virus, which was confirmed to be behind the current DRC outbreak.

WHO officials have warned against implementing travel or trade restrictions on the region since DRC borders Uganda and Rwanda, but called on neighboring countries to "enhance surveillance and preparedness activities."

“There are still significant threats for further spread of the disease. Continued challenges include contacts lost to follow-up, delayed recognition of EVD in health centres, poor infection control in health centres, and cases leaving health centres and refusing transfer to Ebola treatment centres,” they stated. “While the majority of communities have welcomed response measures, in some, risks of transmission and poor disease outcomes have been amplified by unfavourable behaviours, with reluctance to adopt prevention and risk mitigation strategies.”

The current outbreak was first reported in early August and is centered in the northern provinces of North Kivu and Ituri, which poses a unique challenge to health officials due to active rebel groups controlling portions of that territory.

Officials said they have a total of 142 confirmed and probable Ebola cases, 66 off the 97 deaths were confirmed cases.

At least 19 health workers were infected during the response, three of whom were among the deceased.

More than 10,000 people have been vaccinated using the new Zaire vaccine, V920, since early August in the DRC.

WHO officials said they were still focusing on outreach for some communities who may be hesitant about the new treatment option, meeting with families of patients to help teach them about the disease and preventing any further sprea.d

“We are seeing fewer cases of Ebola each day in DRC, but with each new case is always the possibility of a super spreading event that could re-launch the entire outbreak,” Peter Salama, WHO deputy director-general for emergency preparedness and response, tweeted Tuesday.

"Although the number of people vaccinated…surpassed the 10,000 mark yesterday, we are focused on the individual families and communities where there is less acceptance of the vaccine, to answer their questions and explain this intervention.” 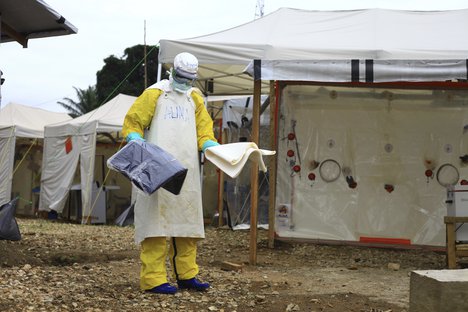 Dutch wrestle with national apology for 250 years of slavery

The Secret Reason the US is Still in Syria

Russia rejects $60-a-barrel cap on its oil, warns of cutoffs

Sweden extradites PKK member to Turkiye, as it continues to seek NATO membership

Lebanon's Mikati calls for 'political will' to elect new president

Britain is in decline. Sunak’s deluded approach will do nothing to stop it | Simon Tisdall

Israel carries out strikes on Gaza after rocket attack

Creative Commons / Ministry of the Presidency. Government of Spain