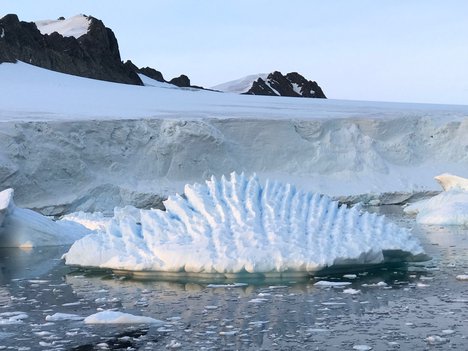 Two new studies have found the ice in the Antarctic is melting at record-breaking rates which will have the subsequent sea rises reaching catastrophic levels for countries around the world, according to The Guardian.

One report led by scientists in the United States and the United Kingdom found the rate of melting from the Antarctic ice sheet has tripled in speed in the last five years and is now vanishing faster than any other recorded time in history.

Another separate study warned unless the world takes urgent action in the next decade, the melting ice would contribute more than 25 cm to a total global sea level rise of more than a meter by 2070.

The study said sea level rise could lead to the collapse of the entire West Antarctic ice sheet and amount to a 3.5m sea-level rise.

"Thanks to our satellites our space agencies have launched, we can now track their ice losses and global sea level contribution with confidence," said Shepard, noting that even he found the rate of ice melt "surprising."

“This has to be a cause for concern for the governments we trust to protect our coastal cities and communities,” Shepherd said.

The study was published in the journal Nature and involved 84 scientists from 44 international organizations.

it claims to be the most comprehensive account of the Antarctic ice sheet to date since it reveals how before 2012, the Antarctic lost ice at a steady rate of around 76 billion tons per year, around a 0.2mm per year contribution to sea-level rise.

But since then, there has been a sharp rise in the ice melt, resulting in the loss of 219 billion tons of ice per year, around a 0.6mm per year sea-level contribution.

The second study was also published in Nature and warned that time was of the essence to help save the unique ecosystem of the Antarctic since, without it, the world would suffer from dire consequences.

The scientists used two probable scenarios for the state of Antarctica in 2070.

The first was if urgent action on greenhouse gas emissions and environmental protection is implemented within the next year years, while the second was if emissions continued to rise at their current rates and if the Antarctic was exploited for its potential natural resources.

Both scenarios found the history of the region depended on the choices made over the next decade, for both climate-change and on environmental regulation.

“Some of the changes Antarctica will face are already irreversible, such as the loss of some ice shelves, but there is a lot we can prevent or reverse," said co-author of the report, Prof. Martin Siegert from the Grantham Institute.

“To avoid the worst impacts, we will need strong international cooperation and effective regulation backed by rigorous science. This will rely on governments recognizing that Antarctica is intimately coupled to the rest of the Earth system, and damage there will cause problems everywhere.”

Scientists also warned how the oceans around Antarctica function as a massive "carbon sink" since they serve in absorbing large amounts of greenhouse gases to help mitigate the impact of climate change.

Siegert warned: “If the political landscape of a future Antarctica is more concerned with rivalry, and how each country can get the most out of the continent and its oceans, then all protections could be overturned.

“However, if we recognize the importance of Antarctica in the global environment, then there is the potential for international co-operation that uses evidence to enact changes that avoid ‘tipping points’ – boundaries that once crossed, would cause runaway change, such as the collapse of the west Antarctic ice sheet.”