South China Sea Is At War In More Ways Than One

“Europe is a landscape; East Asia a seascape. Therein lies a crucial difference between the twentieth and twenty-first centuries.” – Robert D. Kaplan

If the Pacific Ocean is the mother of all oceans, then the South China Sea is surely the mother of all seas. Consequently, and because half of the world’s gas, oil and shipping tonnage navigate through this area each year, it’s no wonder an outsized China, which is rising inexorably among a handful of dynamic nations, has for the last two decades reclaimed the Paracel and Spratly Islands, as well as the Mischief Reef.

Nor is it surprising China’s forward-thinking strategy to build artificial islands has alarmed U.S. officials in Washington and elsewhere. Like Robert D. Kaplan warned in “Asia’s Cauldron: The South China Sea and End of a Stable Pacific,” the most dangerous power in the South China Sea is China and its century of humiliation at the hands of the Western powers, etched in acid on the pages of Chinese textbooks today.

The U.S. Sorghum Armada that just had to change course in the South China Sea to look for new buyers was the latest salvo to regain pride. By slapping hefty anti-dumping deposits on U.S. imports, Beijing’s not about to let the U.S. win a trade war. They also know the grains came from the Red States filled with President Donald Trump‘s most ardent supporters. In this formative war, China’s message is tread lightly with tariffs.

But China’s been sending a message to tread lightly for quite some time. The Asian giant, which claims more than 80 percent of the South China Sea, has been building artificial islands in the region to protect its sovereignty and national security. The U.S., meanwhile, claims the waters are under an international maritime treaty, something China is in breach of according to international courts. The war over laws and treaties will for sure continue.

So will the war over history. Indeed, China’s claim by virtue of historical right over the islands that’ll conduct maritime operations is already disputed. So, too, is it’s “nine-dash line,” a radical demarcation of maritime sovereignty which takes an enormous bite out of the same territorial claims of the Philippines, Vietnam and other nations ringing the sea. In fact, the first casualty in this war will probably be history and truth, truth and history.

Still, China has a point, since it’s depended on centuries of dominating the western side of the South China Sea, notably the Tang and Song Dynasties. Not only did China control much of the littoral a thousand years ago, but it pressed trade and controlled the ability of individual cities and regions to participate in lucrative shipping routes. The more recent 1980 United Nations Law of the Sea will have little impact on China’s ambitions.

Another thing that’ll have little impact is U.S. claims on the South China Sea. However, and starting in the 1898 Spanish-American War, and then sealing its claim in blood during World War II, the U.S. isn’t about to be denied its historical role. As the underbelly of Asia and strategic staging point, the sea will be used extensively as it had during the Cold War, Korean War, Vietnam Conflict and Taiwan’s bout with China.

But the war over reclamation is even now causing another war. Environmentalists, for instance, warn significant ecological damage is under way. One expert from the University of Miami, John McManus, has further called China’s building of man-made islands “the most rapid rate of permanent loss of coral reef area in human history.”2 As a result, they’re calling on the UN Environmental Assembly to step and stop China.

Others would also like to stop China, mainly over resources. To the dismay of the U.S. and many others, China has already claimed sovereignty and absolute access to the seabed and the oil and gas that exists there. But with estimates putting the total amount of oil and natural gas at levels similar to the Middle East, don’t think for a moment the most populated nation on earth will forgo this treasure chest of black gold energy for years.

And then there’s the early stages of conventional warfare. China’s focus on submarines, amphibious vessels and small surface combatants is only one piece of a larger puzzle to dominate amphibious operations and coastal regions – domains the U.S. still has pre-eminence in. But given China’s rapid military modernization, its Great Wall of Sand and rising nationalism, this may not last long.

In other words, there’s no guarantee the U.S. would win a future war against China. To be sure, U.S. military and naval strategists are warning China has already realized this very thing and is therefore continuing to improve its naval forces. Naval forces, that is, with a combat fleet that is scheduled to reach 415 ships by 2030, surpassing that of the U.S. No longer is China a “rising” maritime power, but an “arrived” great maritime power.

It’s clearly obvious the South China Sea is at war in more ways than one. It’s to be expected, however. Not only does the sea guard the gateways to the Gulf of Thailand and Strait of Malacca – that leads to the Indian Ocean, but it shares a coastline with Vietnam, Cambodia, Singapore, Malaysia and the Philippines. It’s also the key to Taiwan and Taiwanese Strait which flows into the Koreas, Japan and the Pacific Ocean.

Whether it be trade, building of artificial islands followed by environmental degradation, claims over history and international treaties, shipping lanes, important resources or waves of wavering diplomacy, Kaplan was apt to have written: “The South China Sea functions as the throat of the Western Pacific and Indian oceans – the mass of connective economic tissue where global sea routes coalesce.”

(Dallas Darling is the author of Politics 501: An A-Z Reading on Conscientious Political Thought and Action, Some Nations Above God: 52 Weekly Reflections On Modern-Day Imperialism, Militarism, And Consumerism in the Context of John’s Apocalyptic Vision, and The Other Side Of Christianity: Reflections on Faith, Politics, Spirituality, History, and Peace. He is a correspondent for www.WN.com. You can read more of Dallas’ writings at www.beverlydarling.com and www.WN.com/dallasdarling.) 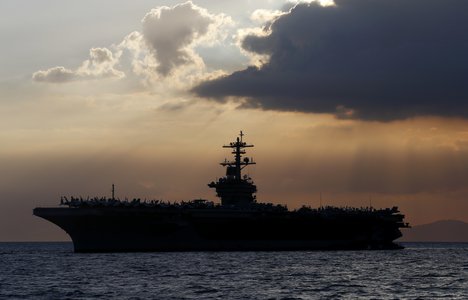