Sorry To Break The News, But A U.S.-Led World War III Is Imminent

Though it’s hard to prove something that hasn’t happened, the past is a good indicator. The interwoven interests of Wall Street, the Pentagon’s defense industries and Corporate America will consequently ensure another World War takes place.

Since the rapid military demobilization after war always meant economic booms turned to bust, the timing of this next U.S.-led World War is going to be soon.

It will moreover be driven by four economic factors: An international gold-backed currency war, a desire for a robust defense industry, a major financial-income inequality crisis and supply-chain trade wars.

Prior to the 2011 U.S.-backed intervention in Libya that toppled Muammar Gaddafi and killed him, the Libyan strongman developed a plan to quit selling Libyan oil in U.S. dollars. Along with demanding payment in dinars, his regime sat on a mountain of gold – nearly 150 tons. With a 100-percent state-owned bank that wasn’t connected to the World Bank or the central banks in Europe and the U.S., he had also planned to export his currency revolution to the rest of Africa. It was, to say the least, more than the U.S. could stomach since the best way to destroy its capitalistic system is to debauch the dollar.

Turkey, China, Iran, Russia, Venezuela and the Internet are all ditching the dollar for their own gold-backed currencies or cyber-money They and other nations, in fact, just repatriated their gold reserves housed in the U.S. Federal Reserve System. At stake is trust in a system that appears risky and in debt and no longer credit worthy.

Reducing their dependence on America’s gold reserves – which hasn’t been audited – will by far weaken the dollar’s value. As banks and investors look for other options, the U.S. will surely be forced to ignite a World War III to increase the gold-based dollar’s value.

It’s no secret the U.S. government and media uses national security – at any cost – to identify all foreign unrest or instability threats. Indeed, each year the Quadrennial Defense Review lists the Pentagon’s strategic goals, identifying certain regions as a potential concern for the “Homeland.”

The list includes Europe, Russia, the Middle East, South Asia, China, Northeast Asia, Southeast Asia, Oceania, the Indian Ocean, Latin America, Africa, the Arctic and Cyberspace.1 In other words, threats – real or imagined – exist in almost every part of the world except Antarctica, and even that’s questionable and in doubt.

The U.S. just announced its defense-industrial base needs its budgets to grow 5 percent per year to remain robust and stable. Since the 2008 recession never ended and there’s been a drop in the market’s number of prime defense vendors, it’s impossible. Nor does the new American way of war conform to the same capitalistic ventures as World War I or II did.

Only a World War III can stop deficit spending, correct asset bubbles, reign in interest rates, boost the dollar and increase jobs and wages. A World War where nations are destroyed to the same extent the U.S. can loan money, invest and rebuild.

War Is the Health of the Economy

French economist Thomas Piketty rightly observed the finance-income inequality crisis found in capitalistic or neo-liberal systems always increased during “peacetime.” One way to reduce the accumulated capital of the wealthy is therefore through war. To be sure, America’s experience in World Wars I and II caused sharp drops in income inequality since workers for once had a small advantage. Not only did the conscription of so many people into the armed forces place a premium on scarce labor, but income and luxury taxes ensured a much-needed update for wartime infrastructures and job training.

The U.S. is in another finance-income inequality crisis. The latest tax cuts linked to heavy spending on the military is at the expense of health benefits, education, environmental rules and lifesaving regulations. Causing Americans to spend more and save less while massive debts has been matched with Wall Street’s reckless speculation and borrowing, financial bubbles and endangering the financial security of depositors and pensioners. Even the national government is in the midst of a financial crisis of its own worth $21 trillion. It must start WWIII to let the steam out of the pot that’s about ready to explode.

Supply-Chain Trade Wars to the Rescue

The Prussian military theorist Carl von Clausewitz had many aphorisms, of which the most famous is “War is the continuation of politics by other means.” But “economics as the continuation of war by other means” may be more true since it forms the very basis of humankinds hierarchical needs-and wants. Economic elites in the U.S., which are in the business of protecting their disproportionate amount of global wealth while contributing a disproportionate number of its members to the controlling institutions and key decision making groups, have therefore set their sights on the world’s economic supply-chains.

They want control over supply-chains that develop and transport natural resources, raw materials and finished products to consumers. This means a U.S.-led World War III could be fought over Syria’s east-west/north-south supply-chain routes, the China-Russia-European Silk Road or the Russia-Korean-China Iron Silk Road.

The Iran-Russia-Middle East-Yemen supply-chain routes that links Africa, and shipping routes through the South China Sea, Taiwan Strait and Gulf of Aden – where reports of a geological disaster is occurring – will be hot spots too. And then there’s the many unknown unknowns.

Throughout America’s history, corporate and military interests have hardly been strangers.2 To be sure, the most dominant cultural attributes maintained

Considering the recent trade wars and ongoing privatization of military conflicts, not to mention the hazily defined military goals or the outsourcing of morality to seedy mercenary groups, it’s only a matter of time before a U.S.-led World War occurs.

Sadly, time isn’t on the side of peace. Indeed, most know where President Donald Trump and the Republicans stand when it come to using military force to stir up patriotic fever or to save midterm elections. But even Secretary of Defense James Mattis, who disagreed with the rush to bomb Syria until an investigation was performed, said a war with Iran over its nuclear treaty is increasingly likely. With the defense-industrial base review due in May and the Federal Reserve meeting, including the U.S.’s hegemony over supply-chains being challenged, don’t be surprised if we wake-up fighting with sticks and stones.

(Dallas Darling is the author of Politics 501: An A-Z Reading on Conscientious Political Thought and Action, Some Nations Above God: 52 Weekly Reflections On Modern-Day Imperialism, Militarism, And Consumerism in the Context of John’s Apocalyptic Vision, and The Other Side Of Christianity: Reflections on Faith, Politics, Spirituality, History, and Peace. He is a correspondent for www.WN.com. You can read more of Dallas’ writings at www.beverlydarling.com and www.WN.com/dallasdarling.) 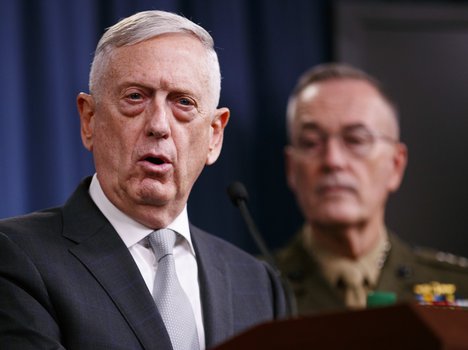