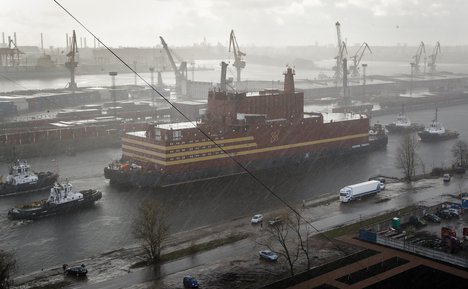 Russia became the first nation in the world to launch a floating nuclear power plant this weekend, sending the 70-megawatt Academik Lomonosov from St. Petersburg into the Baltic Sea, according to Newsweek.

The power station will be towed around Norway to a Russian town of Murmansk where it will take on nuclear fuel before it's relocated to the oil industry town of Pevek along with a desalination plant and drilling rigs.

Construction on the floating plant started in 2007 and cost more than $232 million to construct the initial ship, according to state-run Rosatom, who originally wanted to load the reactor with nuclear fuel at St. Petersburg before sending it to Pevek.

However, a number of other Baltic countries and Greenpeace launched a petition to demand the alternate plan of loading and testing the plant in Murmansk, far away from densely populated St. Petersburg.

The Akademik Lomonosov was designed to provide energy for hard-to-reach coastlines along Russia's subarctic regions but many were concerned about the environmental risks with the first of its kind project.

“Nuclear reactors bobbing around the Arctic Ocean will pose a shockingly obvious threat to a fragile environment which is already under enormous pressure from climate change,” Jan Haverkamp, nuclear expert for Greenpeace Central and Eastern Europe, said after the Akademik Lomonosov's launch this weekend.

Greenpeace joined forces with Estonia, Finland, Latvia, Lithuania, and Sweden to challenge the original plan of filling it with nuclear fuel near St. Petersburg so the plant is being moved through the busy Baltic Sea before the testing in a more secluded area.

“To test a nuclear reactor in a densely populated area like the center of St. Petersburg is irresponsible, to say the least. However, moving the testing of this nuclear Titanic away from the public eye will not make it less so," Haverkamp warned.

Greenpeace said any accident onboard could lead to "Chernobyl on ice," alluding to one of the worst nuclear disasters in history which happened at the Soviet-plant in Pripyat, Ukraine.

The Akademik Lomonosov is currently en route to Murmansk so it will need to navigate the narrow straits between Denmark and Sweden before heading north along Norway's coast.

Maritime authorities in Estonia, the first country the vessel sailed around, said the power plant had limited maneuvering ability which meant other ships had to make way for it and the Russian military escorts surrounding the plant, according to public broadcaster ERR.

The Radiation Safety Agency said officials were monitoring the journey as the plant will approach Sweden later this week and proceed through the Øresund straits, shared with Denmark, news site The Local reported.

Russia is one of five nations with competing claims over Arctic waters and has been working to establish a stronger foothold across the region with more plants planned for the region if the Akademik Lomonosov runs successfully when tested later this year.

Rosatom said the nuclear ship will be replacing a 48-megawatt nuclear power plant in the Pevek region and was easier to construct the ship in St. Petersburg and then transport everything by sea instead of constructing a plant in such a remote location.

"The pier, hydraulic engineering structures, and other buildings, crucial for the mooring of [the floating power plant] will be ready to use upon Akademik Lomonosov arrival," said Rosatom in a press release.